The Ward by Jordana Frankel 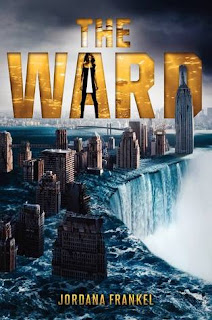 The Ward is a dystopian YA book with a sequel about disease, lies, and magical water. Due to the Wash Out, a flood, Manhattan is overrun with dirty water. Renata (Ren) and her foster sister Aven live together, barely getting by. Aven has the Blight, an incurable illness caused by pollution. They live in the Ward, an area in downtown Manhattan that is home to the poor, and little is being done to help.


But when the disease reaches the Upper Islets, the government recruits Ren to search for fresh water in the hopes of it leading to a cure or remedy. She takes the job only to help Aven. While on the job, she finds magical water that could solve everything. However, people protect that water, and she finds herself caught up in a huge mess of lies, and trusting in others could be her biggest mistake- one that would destroy everything.

I have to say how awesome the cover is! I love having her being inside the letter A in the title. All the buildings going towards the edge of the waterfall is very scary, but it really captures your attention. I also really enjoyed the characters. Good or evil was a struggle in this book as well as trust. Trusting in the wrong people made for many changes along the plot.

While I enjoyed the characters, struggles, and the cover art, I have two major problems with The Ward. First of all, I had barely any background knowledge of the situation. Readers were not given any information about anything outside of Manhattan. The book did not have any specific information about the Blight, just basics. I have many questions, and I could probably write a whole book about the missing information! Secondly, there was not much imagery. I had a hard time picturing the events and there were very few setting descriptions that were significant.

While I did not enjoy this book, I would like to read the sequel, The Isle.