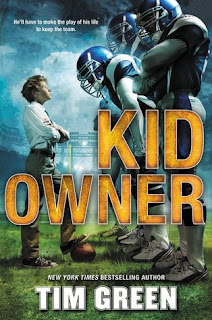 Kid Owner is a realistic fiction sports book about football and leadership for middle grade readers. Ryan Zinna's parents are divorced, and his mom does not ever talk about his dad. In fact, "father" is viewed as another F-word in their family. However, when his father unexpectedly dies, Ryan learns that he was the owner of the Dallas Cowboys! Against his mother's wishes, in the will Ryan's father gave him ownership of the football team, despite the fact that he is 12! However, Ryan's horrible stepmother takes legal action to try to make her son, Dillon, the owner instead. He soon learns that the Cowboys are not the only thing he might lose.

Meanwhile, Ryan takes advantage of this new authority and connections to the players to convince his middle school football coach to change the plays to make them more suitable to him. He also gets to be quarterback!

I liked the irony of the situation. While Ryan is getting so much attention and could be one of the most famous people ever and owning the Cowboys, he is also almost completely ignored on his own team! Ryan is in two different situations, and I enjoyed how they came together in the end.

Furthermore, it was interesting how close their games were to the real game, and how much detail about football was put into Kid Owner. I learned a lot about how football works from reading the book. However, I would have preferred to know what the specific plays were. The book said what the play was called, not what it was. That left me a little bit clueless during the book when they played.