Teardrop and Waterfall by Lauren Kate 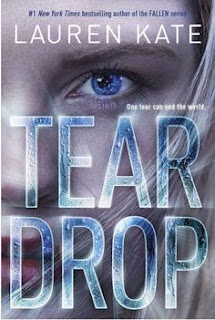 Teardrop and Waterfall are young adult fantasy books about tears flooding the world and bringing back Atlantis. In Teardrop, ever since Eureka's mother drowned in an "accident," all she cares about is her friend Brooks, a locket, a mysterious stone, and an ancient book from her mom about a girl who cried an entire continent under the sea. What she doesn't know is that it is not a story. It's real. Ander, a seedbearer, tells her that she is a tearline girl. If she lets her tears touch the Earth, she would create the biggest flood in the world and bring back Atlantis, and its evil king.

In the sequel Waterfall, Eureka travels across the ocean with Cat, Ander and her family to stop Atlantis from rising and stop Atlas from making slaves out of the dead human's souls. On land, they head to find Solan, the only Seedbearer who knows how to stop Atlas. Eureka can save the world, but she will have to give up everything she has ever had to do so.

Eureka had very low self-esteem throughout both books. She was constantly depressed and doubts herself. She gained a little more confidence in Waterfall, but I feel that she was too negative. I also did not like that in both books, the important events were so simple and short and the unimportant ones were so long. I had to constantly go back and reread the text to make sure I understood fully what just happened.

I would recommend reading the two books.