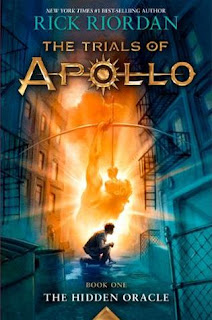 The Hidden Oracle is the first book in the new middle grade Greek mythology series, The Trials of Apollo, the follow-up series to The Heroes of Olympus. Following the defeat of Gaea, Zeus blames Apollo for the war because his son is Octavian, and he played a big role in starting the war. Zeus punishes Apollo in one of the worst ways possible- he makes Apollo mortal and takes his powers. He is exiled from Olympus and lands in New York.

He is immediately beat up by some people on the street, defenseless. Just in time a young demigod named Meg, daughter of Demeter, saves him. Apollo can redeem himself by serving a demigod, and Meg happens to be the one. They travel to Camp Half-Blood to get help from his children and discover that an enemy that he fought long ago is taking control of the Oracles, and as the god of prophecy, he might be the only one who can stop it.

I love Rick Riordan, and I was very excited to read this book. I was not disappointed! I love the idea of telling the point of view of a god, especially my favorite one, Apollo! He is the god of music, archery, prophecy, medicine, the sun, and poetry. The book was very funny and entertaining, especially how he freaked out when he looked at himself! (Apparently, gods have never heard of acne.) Apollo finally experienced the feeling of guilt, which was very interesting and important. It was great to learn more about the family of the gods and their experiences.

I highly, highly recommend this book for fans of Rick Riordan and mythology! Unfortunately, readers have to wait a long time for the other books. There are five books that will be in The Trials of Apollo series, and the second book, The Dark Prophecy, comes out sometime in 2017. The third book will be out in 2018, the fourth book will be out in 2019, and the last book won't come out until 2020!!! (Why, Rick Riordan, Why?) Four years might be the longest I have ever waited for a book, but I am very much looking forward to it!!!

Email ThisBlogThis!Share to TwitterShare to FacebookShare to Pinterest
Labels: 5 Stars, Fantasy, Middle Grade, Mythology, Series
Posted by pagesforthoughts at 11:00 AM