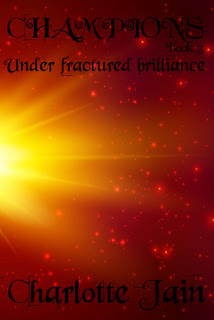 Champions: Under Fractured Brilliance was sent to me by the author, and is the third book in the YA Greek mythology Champions series. Following the last major conflict between Kyle and April, Caria is in grave danger. The Sky Realm is deteriorating, causing darkness and detrimental lightning storms. The moon even disappeared, and several Gods are losing their immortality.

While Noah works with Apollo to try to stabilize the sky, Kyle and April head on separate adventures to find special objects in the Underworld that will turn the tides in their war.

This book's main focus is adventure. Basically, it is as if they said, "Let's put a pause on all this fighting, and go into the Underworld and find magical objects!" I am not saying that in a bad way. I actually really enjoyed the adventure, and it showed a different side of the author's writing. Imagine The Hobbit infused with Greek mythology. This was very unique.

The whole central being of this book was darkness. The sky was all dark and the moon vanished, and the Underworld is all dark and death. Even some characters, especially Kyle, were depressed! (The cover is dark, too.) I thought it was pretty cool, and the darkness was very symbolic of the dark, tense time in the war.

Kyle was really struggling. His girlfriend's mind is breaking, his dad is locked away in the Underworld. He had a lot on his plate, especially given Caria's destruction. I loved his unwillingness to quit. I also liked that the Gods were more involved. Readers got to see drama in the immortals' life, and it showed that being a God and being immortal is not easy.

The only thing I did not like is that there was too much explaining. The majority of the dialogue was really Apollo or Ares explaining historical events or Gods in mythology, which felt a little too educational.

I cannot wait to read Champions: Into Shattered Ice, which comes out in November 2017!

Read my review of the first book in this series, Champions: At Fire's End.

Read my review of the second book in this series, Champions: Amid Ember's Betrayal