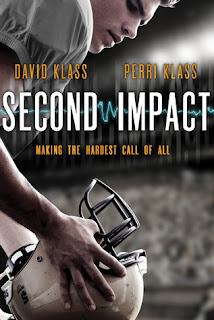 Second Impact is a YA sports fiction book written by a brother and sister exposing the dangers of football and head injuries. The city of Kendall is obsessed with football. For Jerry Downing, that is great news since he is the quarterback of the high school. After a car accident, he was barely given a second chance. Carla Jenson is a former soccer star and the lead reporter of the sports section of their newspaper. She recently recruited Jerry to co-author a blog about the current football season from their perspectives.

When Jerry's best friend gets tackled too hard and gets hurt, Carla starts to research about head injuries, and questions whether the injuries are worth playing. But in a town fixated on football and a mean principal, not everyone wants to hear this news, and Jerry and Carla find themselves in deep waters.

Unlike David Klass' Losers Take All, this is a serious book about head injuries and dangers of football. I loved this book and would gladly read it again! Second Impact is told through alternating blog posts that Carla and Jerry write, something I have not seen before. The format caused there to be quite a few tangents, but I did not mind.

Carla is strong and brave. She stood up for what is right and was not afraid to speak her mind on the issues. She was a soccer player, but stopped because of an injury, and she learned that sometimes injuries can be more serious than the coach tells you. Jerry is passionate, hard working, and honest. The two of them tell a great story.

A lot of information was told through this book and it is very educational about concussions and other brain injuries as well as surgeries. This book is not just about football, it's also about journalism and ethics. Freedom of the press came up a lot, and right to privacy. If somebody exposed a real issue and a huge problem, does it really matter that they broke a law to get it?

The ending was amazing, and really shows the main idea- a player's health is more important than the game. Second Impact teaches about teamwork, safety, and responsibility.

I highly recommend that you read this great book!