Nightfall (Keeper of the Lost Cities Book 6) by Shannon Messenger 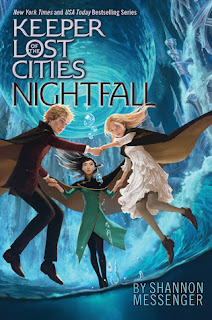 Nightfall is the sixth book in the middle grade fantasy series, Keeper of the Lost Cities. This is my all-time favorite series, and I own all the books! Nightfall was just released last week, and I was eagerly awaiting its arrival.

Even after a devastating loss, Sophie refuses to back down. But her next dilemma hits too close to home. The Neverseen kidnap her human parents, and Sophie's human sister, Amy, barely manages to escape. After hiding Amy safely in the Lost Cities, time is of the essence for Sophie to find her family. The stakes are higher than ever for Sophie to finally unravel the secret behind Nightfall, and destroy it.

After that cliffhanger in Lodestar, waiting an entire year for this book was so hard! Picking up right at the sentence where the last book stopped, Nightfall finally does what I have been waiting six books for! And then swoops in with the biggest, most shocking plot twist of any book I have ever read! Shannon Messenger did a great job keeping me on my toes.

Because I pre-ordered this, I was fortunate enough to get the Barnes and Noble exclusive edition that included an extra story at the end from Keefe's perspective, which was awesome! Nightfall is the most emotional book in the series yet, with the most risk for characters. Sophie's family's lives are at stake, which understandably puts a ton of pressure on Sophie. Nightfall focuses heavily on the characters' relationship with each other and their own internal conflicts, and I enjoyed watching them dig deep into who they truly are. Once again, the cover art blows me away, and it really showcases the true meaning of this book, the friendship and care for one another.

Nightfall also dives deep into what fans argue about most- the love triangle. (Or wait- is this a square?) Will Sophie end up with Dex, Keefe, or Fitz? That question gets way more complicated and is finally tackled head-on with all three boys in adorable ways. I really want her to end up with Keefe! Go Team Foster-Keefe! Normally I don't care about fandoms or mention them in reviews, but I cannot ignore it in this series. Nobody can possibly read Nightfall or this series without having a strong opinion about who she'll be with, and that's one of the reasons I love this series and Shannon Messenger. She makes her readers care strongly and feel emotionally attached to the characters.

As one could imagine for my favorite series ever, I hold these books to a higher standard than others. I have to say that compared to the other books in this series, this one has to be 4 stars. I would have wanted more variations in the pacing of the plot and intensity, and in some chapters it felt like the book flat-lined. I also thought that some of the character development seemed far-fetched. Those are usually Messenger's biggest strengths, so I feel like Nightfall wasn't her best work. Don't get me wrong: I still really loved this book!!! It's just that compared to the others in the series, this wasn't the strongest.

I highly recommend that you start reading the Keeper of the Lost Cities series! I cannot wait for the seventh book in Fall 2018!

Read my reviews of the past five books: