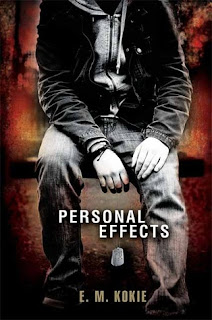 Personal Effects is a YA realistic fiction book about strength in the face of death. Matt's older brother T.J. was in the military and died in Iraq. Now Matt is broken, and his life is falling apart. After another student wore a T-shirt with T.J.'s name on it purposely to upset him, Matt fought him.

He's suspended and charged with paying for the trophy case he broke in the attack, and he's lucky he's not in jail. Matt's relationship with his dad deteriorates. One day, T.J.'s personal effects arrive with all of his belongings. His dad forbids him to touch anything, but Matt looks anyways for glimpses of his brother to remember. He discovers that he wrote a letter that never got sent, and Matt goes on a mission to track down the person and deliver the letter in his brother's memory.

Matt is very angry, which is understandable. However, I love how he took that anger and used it to do something good. He had strong character development and went from fragile and broken to being able to stand up to his father and knowing that he can have a future of his own. I also loved the aspect of independence. He travels across the country without parent permission and successfully takes care of himself. I loved watching him prove to himself and the world that his father is wrong about him and his potential.

This book is full of emotion. The anger, grief, and betrayal jumped off the pages and stabbed my heart in its core. Personal Effects displays the struggles of millions of people all over the world. 4,486 U.S. soldiers died in Iraq, and over 32,000 were wounded. This book yells out loud and clear the pain of death, and how hard it is to cope. For anyone who has lost a family member or friend, this would be a special read. It teaches others that they are not alone in their pain and strategies to help heal the wounds.