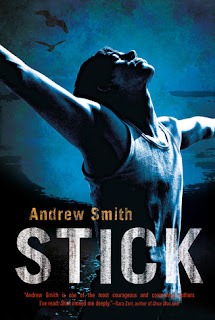 Stick is a YA realistic fiction book about the special bond between two brothers. Stark McClellan has anotia. He was only born with one ear. He is called Stick for being tall and thin. He's constantly bullied for how he looks, but his brother Bosten always defends him at school and on the streets. But neither boy can defend themselves from their abusive parents. When Stark's parents find out that Bosten is gay, he runs for his life. Stark loves his brother, and runs after him, in search of his brother and people who will love them for who they are.

I must say- Stark is only 14. Yes, he is tall, but somehow I find it hard to believe that he can drive successfully 15 hours straight safely by himself. His voice also sound like he's 17. Stark was forced to grow up way too soon and learn to take care of himself. I had to constantly remind myself that he's only 14, which makes this tale even sadder and more infuriating. The level of responsibility on his shoulders is way too much for anyone. To say this book is emotional is a vast understatement.

Stark is one of my favorite male narrators of all time. He has so much piled on him, but somehow he manages to keep a clear head and maintain a positive outlook. This kid gets up every time he falls, and isn't afraid of anything. He is the type of character who will always stick with you. Stark would be an amazing role model for everybody, and teaches others to be comfortable in their own skin. Stick teaches those in tough places to never give up searching for safety and love. While running away is not something I would recommend, know that there is always somebody in the world who will accept you for who you are. There is more to life than your burdens.
I highly recommend this book, but only for older YA readers due to a few intense situations. I am looking forward to reading another book of the author's, Grasshopper Jungle.