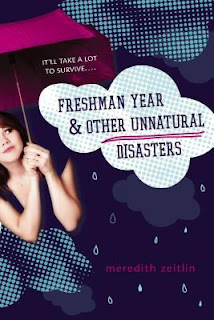 Freshman Year & Other Unnatural Disasters is a YA realistic fiction book about a girl's unfortunate, hilarious freshman year. Kelsey Finkelstein is starting freshman year at high school. She is dedicated to making a mark at her new school, but that doesn't go as planned. She navigates through being goalie on the soccer team with a captain who hates her and getting cast as a fat male butcher in the school play, Fiddler on the Roof. Combined with embarrassing pictures in the school paper and boy problems, she'll need a lot of optimism and self-esteem to get through freshman year.

Kelsey is a stereotypical popular girl. She is very concerned with boys, drinking, clothes, and parties. She is a whiny brat at times and constantly demands attention from her friends, and she is very rude to her parents and sister. Kelsey is very concerned with her appearance and appears shallow in quite a few instances. One thing that's very ironic is that Kelsey and her friends are very immature but the book tackles mature concepts like sex, drinking, and gay awareness.

This book was just okay. It felt cliché and boring at times. There were some funny moments, but some of the ideas were just very far-fetched, like the play. My school actually put on Fiddler on the Roof, so I am familiar with the story. Yes, it was very funny, but I just can't wrap my head around how the "disaster" could have happened for real, like some of the other phenomena. This book is not a good example of freshman year of high school at all, and while it is quite funny, this should no way be compared to the real thing.

I didn't hate Freshman Year & Other Unnatural Disasters, I just didn't like it very much. This is a fine book for a leisure read if you want something lighthearted and funny, but don't take it seriously and don't get your hopes up.