The Helm of Darkness (War on the Gods Book 1) by A.P. Mobley 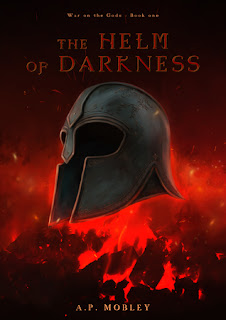 The Helm of Darkness is the first book in a YA Greek mythology trilogy. This book was sent to me by the author and will be released on June 3, 2018.

The Greek gods are real, and they are angry because humanity stopped believing in them. To take control, the Gods created a storm that destroyed most of humanity and allowed them to rule once again. Andy and Zoey are two teenagers who are killed in the storm. However, thanks to a demigod's sacrifice, they are awakened 500 years later to help lead a war against the Gods and take back the rights of humanity. With the help of two demigods, Diana and Spencer, they must travel to the underworld and steal the Helm of Darkness from Hades.

These are ordinary kids who just lost everybody and everything they knew and loved, thrust into a war that they handled with surprisingly vast amounts of mental strength. They are just mortals, normal teenagers. There is no god-complex about them, and they don't have any powers, which makes the story more interesting and is a differentiator to most other books in the mythology space. Each of the characters also have had something traumatic or tragic happen in their lives, and it is interesting to witness how their past shapes their future roles and decisions.

I enjoyed seeing a darker side to the Gods. Mostly in books and in real life, we picture Gods as being heavenly light and pure with good intentions. I liked how the readers for once see the greedy, hateful, controlling side as well. There is always two sides to a person, and I enjoyed guessing which Gods were actually trustworthy and relatively good. I also liked all the different scenery and the variety of the places that they went. I was able to picture almost their whole world. The imagery of that storm was intense and captivating as well as the word choice and usage. The metaphors were really good, and I loved the repeated fixation with the word "myth."

I highly recommend this book and cannot wait to read the next book in the series, Poseidon's Trident!

Email ThisBlogThis!Share to TwitterShare to FacebookShare to Pinterest
Labels: 5 Stars, Mythology, Young Adult High School
Posted by pagesforthoughts at 11:00 AM