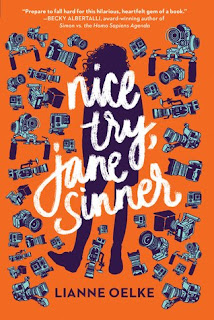 Nice Try, Jane Sinner is a YA realistic fiction book about a girl competing in a college reality show. After Jane attempts to take her own life and fails out of school, her parents make her finish her high school diploma at the nearby college. She agrees, on the condition that she can move out, and joins the college's reality TV show as a way to start over.

The characters are annoying and unrealistic. Jane disguises her depressive feelings and pain by pretending not to care and being numb. She built this wall in front of herself, preventing her from expanding out and preventing others from coming in. She is never serious with herself or anyone else, and makes a joke out of everything with no loyalty. She was portrayed as obnoxious and conceited. I would not want her as a friend.

Many of the characters were made up in her head, and it felt really unpleasant and further supported the fact that she was psychotic and really needed help. I hated how her mental health issues were portrayed, and it felt like that was just thrown in there to make people feel pity for her.

The reality show plotline was really unoriginal, as it is modeled off of Big Brother. Most of the activity in the book was idiotic, such as the McNugz club, where a teacher encourages kids to eat chicken nuggets until they are sick. It took way too long to get to the main point- and I'm not even sure what the point is. Nice Try, Jane Sinner dragged on forever and could have been good at half the length.