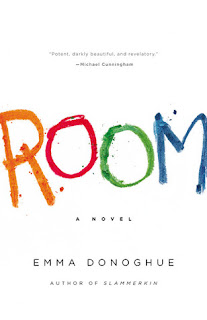 Room is a realistic fiction book about a five-year-old boy and his mother trapped in Room. When Jack's mom was 19, she was kidnapped outside of her college dorm, and held prisoner in Room, a converted shed. Eventually, she gave birth to a little boy. Told in the viewpoint of Jack, this story surrounds what happens when Ma reveals to him that there is a world outside of Room, and the two devise a plan to escape.

I love this book! Originally when I picked it up at my school library, I thought it'd be a fun, quick book to read. Boy, was I wrong! While the book is narrated by a five-year-old boy, being stuck in that room for five years his mom had lots of time to teach him advanced math, spelling, reading, and very big words. Yes, it is told in the viewpoint of of a little kid, but the ideas he was able to convey are huge. At this age he is able to articulate and notice that something is very wrong, and he is able to recognize his mother's depression. Jack is incredible. His love and protectiveness of his mother is enormous and heartwarming. He's a little superhero.

The author managed to voice a realistic child, somehow managing to make him seem his age, but also have critical thinking skills. I also loved his hilarious thinking patterns and rhetorical questions, about everything from baked beans to spiders. He is able to turn a serious, deadly situation funny, making the horrendous conditions light-hearted. There were so many times where you could tell that bad things were happening, but because it was told through the young eyes of Jack, they were easier to bear. It is quite intriguing to watch a little boy grasp the idea that the world is not this room. An ongoing theme was having Jack accept that (almost) everything on the TV was real! That's an extremely overwhelming situation, and even most adults cannot understand how big the world is. Room will leave you thinking for days!

I highly recommend this book, and I am excited to watch the movie adaptation!