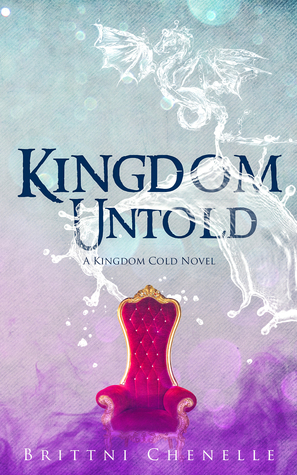 Kingdom Untold is the stunning final book in the YA fantasy trilogy Kingdom Cold. While Minseo and Young try to get along without Charlotte, she bonds with a dragon and attempts to escape captivity in Camelot. Camelot is threatening war, but Morgana's elemental magic is stronger than Merlin. Her magic, along with Charlotte's new dragon, may be the key to defeating Camelot forever and gaining a peaceful home.

I loved the ending and the terrifying war that nearly brought me to tears with a shocking twist. It was my favorite book in the series by far! The ending was perfect and concluded the series nicely.  Morgana's powers were incredible and it was ironic having a child of just 5 years old have more power than Merlin! I enjoyed having Merlin be portrayed as a woman with real emotions and traits of humanity. As a woman, the original Arthurian legends definitely changed in this book- but I honestly prefer this version by the end. Merlin felt real and modern- as did Arthur's immaturity and childishness- despite being alive centuries ago.

In Kingdom Untold, Young must face that his wife has chosen his brother over him- and it obviously hurts, changing his personality and ambitions As he's next in line to be king as well, it was interesting to witness the corruptness and downfalls of having such power. I enjoyed how Minseo matured over the course of the series and how Charlotte made him a better man. In addition, Charlotte has vastly matured with motherhood in this book.

Read my review of the previous book in this series, Kingdom Soul.