Anger is a Gift by Mark Oshiro 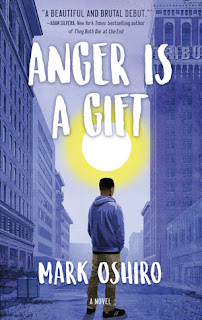 Anger is a Gift is a YA realistic fiction book about police brutality and racism in a high school. West Oakland High School is literally falling apart at the seams. Instead of purchasing textbooks and science equipment the principal is spending money on metal detectors. The police sweep the halls, randomly inspecting lockers and patting down the students for "weapons", inappropriately touching the girls and physically assaulting them with zero probable cause. When the police attack the students during a peaceful walkout, Moss Jefferies decides to use his anger to earn justice for his fallen friends.

Anger is a Gift made me very angry- though I suppose that was the point, to show readers that their anger and sadness can be turned into a force for change and inspire people to stand up for what's right. This book is shocking, and it is hard to imagine that these atrocities occur, especially by the ones who are supposed to protect us. The police are supposed to uphold the law, not break it. Obviously I know from the news about police brutality but it is entirely different to watch it unfold in your lap and be powerless to stop it. It felt real. I would say this book serves as a scary wake-up call to alert people that racism and police brutality is real.

My one complaint would be that I wished the book explored the legal side of the issue. Everything that occurred in this book completely breaks the Eighth Amendment, the Fourth Amendment, and Title 6 of the Civil Rights Act, and even parts of the 14th Amendment. In all these meetings and town hall discussions and media coverage I am shocked that nobody ever discussed how the entire department could be criminally prosecuted- any lawyer watching the news with common sense could have jumped on this.

Other than that, I recommend this book!