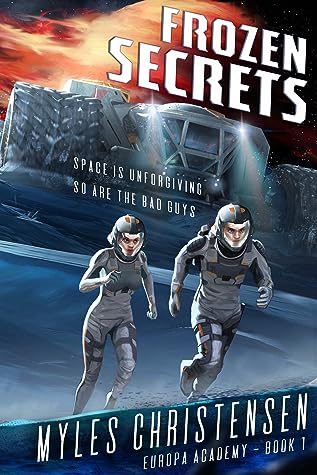 Frozen Secrets is the first book in the Europa Academy series. This book will be released on January 25th, 2020 and was sent to me by the author. In a futuristic society, a colony is started on Jupiter's moon, Europa. Unfortunately, it's not all fun and games because soon the thirteen-year-old protagonist Max Parker and his friends witness a crime and learn more than they should regarding a tragic death, causing the criminal organization Xenon League to be determined to silence and end the life of these the teens. Sometimes, curiosity really can kill the cat.

The concept fascinated me since I learned in Astronomy about how Europa has a large potential for life and mineral resources. Just a few weeks ago NASA discovered the presence of water vapor. I enjoyed the author's invention of new hydrogen isotopes, elements, and molecules, like Catarium, Xenite, and Xenium. I was actually shocked to realize that the science mentioned wasn't real! It was clever how they were modeled after Xenon tri-Oxide since that isotope plays a large role in nuclear fusion. I loved the messages regarding the dangers of nuclear energy and the overall tone felt more realistic than science fiction. The amount of research, dedication, and effort put into making it as scientifically accurate as possible is extraordinary.

The imagery was superb and the cover is awesome! There was a clear plotline with a constant increase in intensity. I love how there were multiple climaxes throughout the book and the story kept evolving in new directions. I liked the irony of the name Max Parker as they are relatively average and common names while his character is anything but! I enjoyed the mystery of which characters were allies versus enemies, and I was surprised by the end. Speaking of the end, the book was wrapped up perfectly, resolving the main conflict but also leaving room for another tale. I particularly liked the touch of romance that has plenty of room to expand upon in the coming books.

I absolutely loved this book and it marks a great start to 2020 and the future of astronomy! I can't wait to read the next book in this series.