The 39 Deaths of Adam Strand by Gregory Galloway 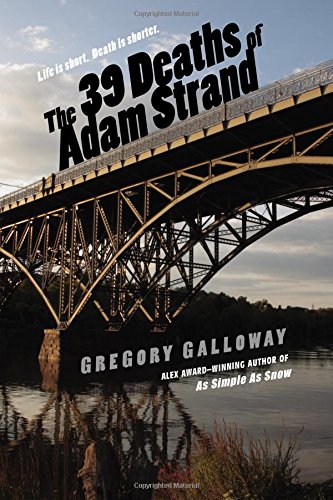 The 39 Deaths of Adam Strand is a YA mix of fantasy and realistic fiction. Adam Strand has a relativity unique ability: he cannot stay dead. Ironically, even though Adam has died 39 times (suicide, accidental, and even murder), but somehow still wakes up the next day totally unharmed.

Initially I thought the irony was very clever, however I quickly became disappointed in this book.  According to the book, all Adam does is sleep, drink, and die. The reader gets bored very quickly of the same shenanigans and little to no plot structure at all. Several things in this "plot" make absolutely no sense. First, if Adam was truly immortal like the book says he is and he is viral on the internet, wouldn't the CDC or the FBI become involved and want to speak to him, quarantine him or experiment on him? The emotions and reactions of the characters in this book were also extremely unrealistic, especially Adam's parents, who one would think to be shocked and bewildered that their son is basically immortal.

I was also hoping for an inspirational message about the importance of life and an attitude change in Adam, but he had very little character development. There is nothing uplifting at all, not even a religious element. I was also disappointed in how it didn't even strike Adam how lucky he is- like think of how he could be a war hero or an astronaut? I am also fascinated by the magic of it all, and I would have loved some imagery of how his skin magically heals or how a bullet hole closes.

All in all I found this book disappointing, confusing, and boring. I do not recommend this book!