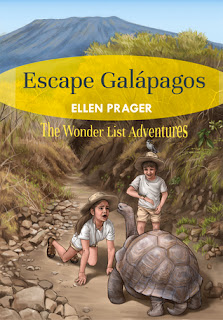 Today is Darwin Day, a perfect occasion to participate in Dr. Prager's blog tour for her latest book, Escape Galápagos that was sent to me by the publisher. When twelve-year-old Ezzy and her younger brother Luke travel to the Galápagos to honor their mother's wish, they end up taken captive at gunpoint by illegal fisherman and poachers. Ezzy must rely on bravery she didn't know she had to not only escape alive- but to save the animals, too.

I enjoyed Ezzy's character development as she grew braver and more courageous. Initially she was terrified of the animals and seemed as an introvert. But as the book went on, she grew more comfortable around nature and the other animals. I loved watching her smile for the first time and relax around the Booby and take that one more step closer to the Iguanas and Penguins. She had many clever ideas and I enjoyed watching her come out of her shell, so to speak. I love how, despite her fear, she became moved by the idea of social activism and risked her life for those animals.

Escape Galápagos' scientific accuracy is incredible and this book is a great educational tool for young students interested in science or wildlife. I enjoyed the timely conflict of illegal fishing and the kidnapping of these precious animals. Galapagos' sharks and giant tortoises are especially in danger. For example, In August 2017 over 6,000 sharks were illegally fished and slaughtered in that area. In addition to this specific issue pertaining to that island, Prager revealed a larger problem of humanity's greed and disrespect for the planet and its wildlife.

I highly recommend this book! Prager has also written Tristan Hunt and the Sea Guardians, a middle grade fantasy series, as well as nonfiction adult books like Dangerous Earth and The Oceans. Continue reading below for an interview with the author!

1. What inspired you to start writing? (ever since back in 1999 with your first Furious Earth)


"Throughout my career I have been incredibly fortunate to experience amazing science and nature firsthand and meet wonderful scientists as mentors and colleagues. Most people never have these opportunities and often to them, science is boring and hard to understand. So, I wanted share my passion for science and nature with more people, combat science illiteracy, and show that it could be done in a way to retain accuracy, be informative and yet entertaining as well."


2. How do you feel about the issue of illegal net fishing and the capture of animals? Is there anything we can do to help protect the Galapagos?


"Of course, I am strongly against illegal net fishing and the capture of wild animals for entertainment purposes - especially whales and dolphins. We need to better protect our wild places, wild animals, and biodiversity. The Galapagos National Park Directorate and their licensed naturalist system do a pretty good job protecting the Galapagos. No one can go on an island without a permit and guide (the guides must report any irregularities), they have capped the number of visitors by ships (need to do more about land-based visitors), and are improving environmental regulations as well. They do however need support to control illegal fishing, over development, and again, control of land-based tourism. Sometimes people suggest stopping tourism in the Galapagos, but I am against this. I strongly believe that well managed tourism provides an important economic incentive for the Ecuadorian government and people to protect the islands, animals, and promote conservation efforts."


3. What inspired you to become a scientist?


"I loved nature as a kid growing up and was inspired by Jacque Cousteau on the television. Then, when I discovered science and in high school - scuba diving - I was so to speak, hooked! The combination of nature, science, and scuba diving was along with great teachers and mentors what really pushed me toward becoming a scientists. I am also endlessly curious and that is, in some ways, what science is all about."


4. When did you first visit the Galapagos?

"In the 1980s, I went to the Galapagos as part of a team studying the impact of El Ninos on corals in the area. We spent two months scuba diving and doing surveys of corals to determine the impact of the strong 1982/1983 El Nino. Unfortunately, the corals in the Galapagos are acclimated to relatively cool water and during strong El Ninos the water temperatures rise. In the 1982/1983 El Nino some 95% of the corals died."


5. What advice would you give for future scientists and/or authors?


"Be pro-active, take risks, discover your passion, strengths and weakness, ask for opportunities and remember perseverance is important. Almost anything is possible with hard work, dedication and a good attitude along with the healing power of laughter." 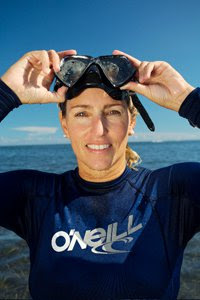 Dr. Prager is a marine scientist, and author, and spokesperson on earth and ocean science issues. She currently works as a freelance writer, consultant, and science advisor to Celebrity Cruises in the Galapagos Islands. She was previously the Chief Scientist for the Aquarius Reef Base program in Key Largo, FL, which includes the world’s only undersea research station, and the Assistant Dean at the University of Miami’s Rosenstiel School of Marine and Atmospheric Science.

She has appeared on The Today Show and NBC News, Good Morning America, CNN, Fox News, CBS Early Show, The Weather Channel, in shows for the Discovery Channel, and was a consultant for the Disney movie, Moana. You can learn more about her at www.earth2ocean.net.

Also be sure to check out other blog tour features!

Email ThisBlogThis!Share to TwitterShare to FacebookShare to Pinterest
Labels: 5 Stars, Animals, Middle Grade, Realistic Fiction
Posted by pagesforthoughts at 6:30 AM