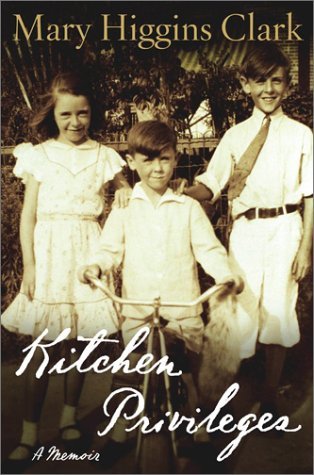 Kitchen Privileges is a memoir describing Mary Higgins Clark's life story and the factors that influenced her love of writing. From her poor beginnings with interesting tenants in her house to being an flight attendant, she always knew she wanted to write. But it wasn't until after she became a widow with five children to care for that she truly decided to follow her dreams.

I became anxious to read this book after learning of her passing on January 31. However I ended up being very disappointed. I am reluctant to criticize a dead person, but I must be honest- Kitchen Privileges felt rather boring and lacking in multiple areas, including figurative language and plot structure.

Clark has struggled in her life and gone through tremendous tragedy, however there was not an inspirational tone, but almost rather from a bragging standpoint of what she was able to overcome. Kitchen Privileges felt like a textbook, made of chronological facts. I cannot compare this to her other writing styles, however I can say that the story, if one can call it that, was very flat with a strong premise that ended up underdeveloped in a plain tone with a large lacking of figurative language. There was no "it" factor, nothing dramatic or suspenseful that Clark is known for.

I do not recommend this book. If you wish to learn Clark's story, just go to wikipedia- because that's what the book felt like.