The Patient from Silvertree (Silvertree Book 1) by Marian Dribus 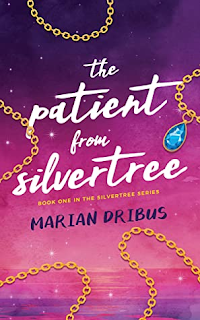 The Patient from Silvertree is a YA realistic fiction book that was sent to me by the author. 40 years ago, a brilliant scientist named Peterson invented a new drug to treat cancer. However, his experiments were unethical, and so he went to jail. Sixteen-year-old Lisa's father is an oncologist. One day an old friend of her father's comes to visit, delivering an ultimatum to treat her cancer with the drug Peterson invented. When he agrees to illegally treat her, it draws unwanted attention that puts Lisa and everyone she loves in danger.

The Patient from Silvertree is one moral dilemma after another, where nearly each impossible decision brought them one step closer to losing their conscience or humanity. This story goes down a darker path of medical ethics and the life-and-death sacrifices one is willing to make for the ones they love- or the ones they loathe. While I tend to love inspirational stories, ones that show the darker side of humanity are just as- if not more- important.

Graham, one of the main antagonists, is my favorite character. He is not evil, but is held in an impossible situation and is forced to commit horrific acts. He does have a moral compass and seems to do his best to avoid violence. I love it when the "villain" has internal conflicts. I hope in the sequel his backstory is revealed. The book also touches on emotional issues, which were mostly depicted realistically. As far as the romance between Lisa and Josh goes, it was predictable, but also pressured and unusual. For the plot, that turns out to be an advantage.

This was one of the more interesting, skillful endings that I have read in a long time. Quite the contrary from happily ever after, this ending is perfect for the story's darker tone and setting with a perfect balance between resolution and the unknown. At the end of the day we want all the bad guys to be caught and the good guys to win- but is that realistic, or purely a false hope? I would argue that the cover needs to be adjusted to highlight that ominous focus, but that is the only critique I have.

I highly recommend this book and am excited to read the sequel that takes place four years later, The Scientist's Daughter.