The Prince of Infinite Space by Giano Cromley 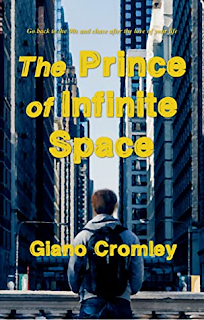 The Prince of Infinite Space is a New Adult realistic fiction book that was sent to me by the publisher and is released today!

A few years later in a sequel to The Last Good Halloween,  Kirby is doing well at the military school and has found a passion for journalism. But when the top editor position for the school newspaper is given to someone just because of their socioeconomic status, he loses his progress. He stumbles on a newspaper clipping that shows Izzy, his once-girlfriend, homeless in Chicago. When his father randomly shows up at the school and wants to take him to meet his dying grandmother near Chicago, Kirby seizes the moment to find her.

Kirby based his self-worth and purpose in life based on journalism, and I can understand how this loss sent him spiraling into depression and defiance. Getting in a dark car with someone you've never met, that claims to be your father, is definitely not something I would do, but I can understand and appreciate his motives. To be honest, I skimmed some of the middle passages about his biological father because I was just so excited to see Izzie again! I loved Kirby being on the streets searching for Izzie, but unfortunately their reunion was not what I was imagining and hoping for.

It is a shorter read than the first book, and I do wish that the author had made the book longer; instead of listing examples of what happened, it would have been nice to experience them. I also wish the ending was more concrete. However, The Prince of Infinite Dreams was still well-written and its depiction of homelessness and mental illness was accurate. To be honest, I liked the first book much better than the sequel. However, I am still glad that I read it!

I recommend this book! While the publisher advertised it as a possible stand-alone, I highly recommend reading the first book first to have adequate background knowledge.