The Big Game of Everything by Chris Lynch 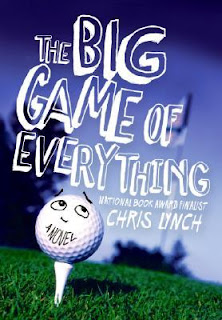 While I was browsing at my public library for something to review, the title of this book caught my attention. Although the story did not seem that interesting, I decided to give it a try. The summer before Jock starts eighth grade, he and his brother (Egon) and his sister (Meredith) go work at their grandfather's golf course. He believes the key to life is to have money, and Egon soon becomes greedy and obsessed with money, too. It doesn't help that their grandfather's ex-Marine friends come to visit, who are pretty much the richest people on earth.

One of the many problems about The Big Game of Everything is that it just went on and on about useless stuff that really could have just taken up a couple sentences, rather than a couple paragraphs. Also, there are some important details that were mentioned early on, but in the mix of the other stuff it was really easy to miss, since there were only a few sentences about it. A lot of times in the book I had to reread some stuff for it to make sense. Not because of the reading level, but because of the voice and the way that it was worded. I will say that it takes a lot of reading in between the lines to figure stuff out.

There were some events that I felt could be left out, and the story and the outcome would still be the same without it. The ending seemed a little rushed, like there was only allowed to be a certain number of pages in the book.

I don't recommend this book, but if you decide to go ahead and read it anyway, please note that it is boring, hard to comprehend, and I really think it is best for high school students.