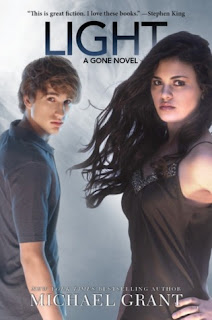 Light is the last book in the young adult dystopian series, Gone. It has been over a year since all the adults disappeared. They thought they were rid of the gaiaphage, but they are wrong. It has reborn into Diana's daughter, Gaia. She has every power, and wants to seriously harm everyone in the FAYZ. After long battles, Sam's people who live at the Lake and Caine's people at Perdido Beach must band together if they have any chance of survival. Gaia is ridding them one by one, and the number of kids are decreasing rapidly. In the end, one will make a sacrifice that will save the world.

The only thing I didn't like was the extremity of Gaia and the extreme amounts of violence that was showed forth by her. It was a little too graphic for me, as some of the other books, and I feel that the way some things ended were slightly more extreme than they needed to be.

There is a lot of good vs. bad in the series, and it seemed like just now they finally realized that there are shades of gray. In Light, this is the book where the lesson finally comes into play about coming together despite differences for a greater cause.

Ending the series was great. A lot of times the endings don't really sum up, and leave room for another book even though you know there is no other book and you are left hanging forever. Fortunately, this book was not the case. The ending was perfectly summed up with really no room to expand on, which is great. It fully showcases their lives after this whole disaster and sums the rest of their lives up completely.

Gone was a good series that kept me hanging until the end, and I recommend that you read this unique series!

See my reviews of the previous books in the Gone series: