The Infinite Sea (The 5th Wave Book 2) by Rick Yancey 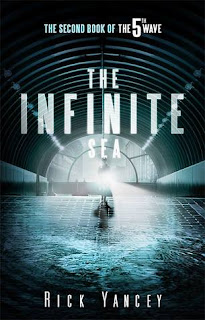 The Infinite Sea is the second book in the YA dystopian trilogy The 5th Wave, also a movie that hits theaters on January 22, 2016. Cassie Sullivan and her friends survived the first four waves, but the fifth is still in progress, and they are wanted dead. Meanwhile, Evan is recovering from his injuries with Grace, desperately trying to get away and back to Cassie. At the same time, Ringer is taken by Vosch, who reveals a huge secret to her.

While I loved the first book, the second book was a huge disappointment! It was appealing that we got to hear from Ringer's side of things, and the analogies about chess were very interesting. I liked the new characters, Grace and Razor. The relationship between Grace and Evan was fun to watch.

I thought the pace of the book was very confusing. The unimportant parts were so drawn out and long, and then all of a sudden the important part happens and it goes by in a page! It's like, "What just happened?"

I will not give any spoilers to the people who have not read this yet, but I have to say how confused I am at the secret that is revealed. I think it was supposed to clear misconceptions, but it left me wondering and filled with countless questions. In my opinion, the series would be way better off if it stuck to its original story.

I recommend that you read the series, and I will definitely read the final book, The Last Star, when it comes out on May 24, 2016!

Read my review of the first book in the series, The 5th Wave.