The Scorch Trials (The Maze Runner Book 2) by James Dashner 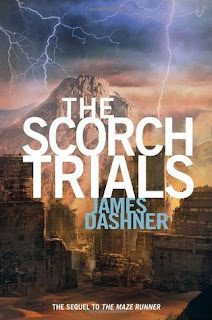 The Scorch Trials is the second book in the dystopian YA Maze Runner series. Thomas and his friends made it out of the maze. It turns out that the others did, too. There are two mazes, and one was for girls, while one was for boys. Teresa is taken and put with the other group, and Aris is put with Thomas’s group. The two groups are challenged with the second trial to cross the Scorch, a desert in one of the most burned sections of the world, to reach a safe haven 100 miles away.

I had very high expectations of The Scorch Trials. However, I felt the story lacked interest and was dragged out much longer than it needed to be. There was also not much variety. In this book, 29 times the phrase “and he finally slept” was used at the end of a chapter or paragraph. I also felt that the romantic interest from Brenda to Thomas was not necessary, and was a distraction. Teresa confused me in this book. How she acted did not make any sense, and I think the explanation could have been developed a lot better.

What I did like, however, is the two groups. I loved how there was also a girl’s group, and it made a lot more sense than just having boys in the experiment. I also liked how it was a completely different situation than the maze. They were out in the open where anything could happen, which is very different than having walls around you.

I definitely recommend you read this book and the series, but not with very high expectations.

Read my review of the first book in the series, The Maze Runner.