Losers Take All by David Klass 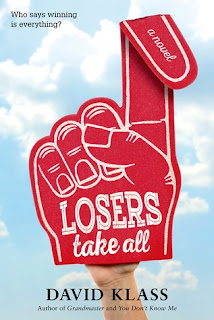 Losers Take All is a funny realistic fiction book where sometimes losing is winning. Jack Logan's high school has a new rule that all students must play on a sports team. Jack's whole family are football stars, and the new principal is not happy at all that Jack will not play football. Instead, he and his other anti-sports friends start a soccer team where their goal is to lose. At their first game, they make so many mistakes that a video of them went viral, and they have fans all over the world laughing and admiring what they are doing. They soon are winning in ways they don't quite know how to handle.

While they enjoy their fame, there are also many problems. Secret information has been leaked to news reporters, their principal and football team is out to get revenge, and tension heats up with Jack and his dad. On top of it all, Jack is good at soccer, which proves an internal conflict. They soon learn that they are in more trouble than they accounted for.

I liked the internal conflict with Jack. His whole family are huge football players and his family members are legends except him. Then when he gets noticed for playing soccer so well, he starts getting recruited. Jack has to decide what means more to him and where his loyalties to the team actually stand. I liked how he balanced both feelings.

This was the funniest sports book I have ever read! The team made hilarious mistakes, some staged, but most accidental, including the goalie falling asleep! I liked how things backfired on them, and it was really hilarious when they did! Even the principal being mean was funny, as the insults were so crazy.

Another thing I enjoyed was the tone. The tone was relaxed and laid back. I also liked that the book was only a little bit about sports. Mostly it was about getting along with others, problem solving, and having fun in life. Losers Take All is a very funny, relaxed great read for everyone of all ages!