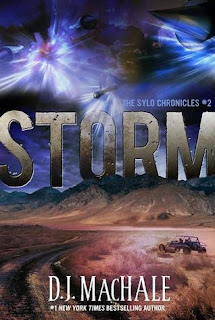 Storm is the second book in the YA dystopian series The SYLO Chronicles. Tucker and his friends have escaped from Pemberwick Island, and they went to the main land, looking for people to tell about the horrible things on the island. Unfortunately, there are worse things to worry about. 3/4 of the whole population is wiped out. A plane has the logo of the U.S. Air Force. This means that the second Civil War is happening- the Navy (SYLO) against the Air Force, with weapons powerful enough to vaporize their opponents.

Tucker and his friends are shocked about the mass genocide, and everywhere they go leads to more questions. They want this to end, but are not sure what side to be on. Tucker knows that everything they encounter are somewhat evil- it's just the best of the worst.

Storm's pace was not consistent, and the story line changed a lot. It was hard sometimes to follow along with the book when the events changed so fast. However, I liked the mystery and all the "why" questions. The betrayal stuff was hard to predict, and it was not who I thought it would be.

Tucker is my favorite character, and he is the most influential. The others look to him as the leader, and his decisions are not always the best due to his grief and anger, but I think that the emotions are just what made him survive. All the characters are different, and I disliked Kent. Olivia was interesting and kind of annoying about wanting to go to relax at the beach in Florida, but it lightened up the mood when things got stressful.

I recommend that you read this book, and I can't wait to read the final book in this trilogy, Strike.

Read my review of the first book in this trilogy, SYLO.