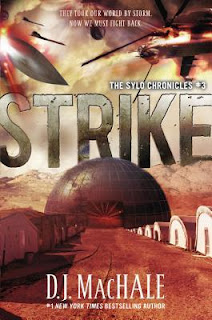 Strike is the third book in the YA dystopian series The SYLO Chronicles. When Tucker and his friends are taken prisoner of the air force, they see the opportunity to get some answers. They sneak in the dome and learn that the air force is from the future of 2324. They want to wipe out the 21st century to move in, since the future Earth is nearly destroyed.

With this mind-blowing realization in mind, their only way of survival is to team up with the Sounders, also from that time who don't believe in mass genocide. Their goal is to get help from SYLO to secure the dome on the outside while the Sounders set off a nuclear bomb inside to destroy the "Bridge", a link between the past and the future. This plan guarantees the Sounders' death- but this is their last chance to save the world.

I did not think about the future, and that did not occur to me at all. That was cool, and it makes sense with events before. The author did an amazing job hiding that. I also liked the change in Captain Granger. It was good to see him being nice. There were also funny ironies that you don't realize until the end.

However, the timeline stuff was super confusing and hard to interpret. I did not understand at all how come the butterfly effect didn't happen, or really anything about timelines in general. The author did not give any information about how the 21st century played out afterwards.

I recommend you read this series.

Read my review of the first book in this series, SYLO.

Read my review of the second book in this series, Storm.