Because You'll Never Meet Me by Leah Thomas 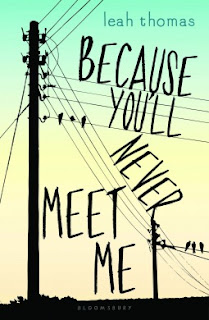 Because You'll Never Meet Me is a mix of realistic fiction and science fiction. This YA book has a sequel. Ollie has a deadly allergy to electricity. At least, that's how he explains it. Basically Ollie and electricity do not agree. If Ollie gets anywhere near the cable line at the end of his driveway, he is thrown backwards. That means no cell phones, no music, no cars, and no television. Exposure to these things causes him to have excruciating seizures. So he lives out in the woods in the middle of nowhere. The closest neighbor is a mile away.

Moritz was born without eyes. He has the space for them, but there are no eyeballs in the sockets. Because of no sight, his ears adjusted and he can use echolocation to "see" anything. Of course he can't explain this, and he has to wear thick goggles around where his eyes should be because the sight of no eyeballs is quite disturbing. He also has an electric pacemaker for his heart. Ollie and Moritz can never meet due to Moritz's pacemaker, but they both are lonely and disconnected from the world. Told through an exchange of letters, this book tells about the friendship that formed and saved their lives.

I have definitely read my fair share of sci-fi books, but I have never read anything about somebody who has no eyes. I have also not read much about echolocation. I was really intrigued!  Fitting in and going to school is really hard for him. He can't just walk in and say "I have no eyeballs and I use echolocation." There are some things you really just can't explain, unfortunately for him.

If you met Ollie in real life, you would probably ask him how many cups of coffee he had that morning. The characters' voices are almost opposites. Ollie is energetic and childish while Moritz is mature, dark and condescending. I like the contrast between them. I liked the mystery of figuring out how they ended up with their abnormalities, and their secret connection. The book is written so well that half the time I forgot I was reading letters! Books about male friendships are not common, and I liked the direction Because You'll Never Meet Me took.

While I would not say that this book is inspirational, it does teach about making the best with what you have, and does show the value of friendship. Having someone to talk to benefited these boys and opened up their worlds.

I highly recommend that you read this book, and I cannot wait to read the sequel, Nowhere Near You!