Champions: Amid Ember's Betrayal (The Champions Book 2) by Charlotte Jain 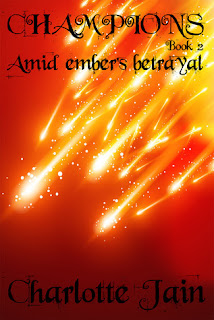 Champions: Amid Ember's Betrayal was sent to me by the author, and is the second book in a YA Greek mythology series about a modern twist on the famous Olympian and Titan war. For decades, the Olympian Greek Gods have fought the Titans. Desperate to just stop the fighting, the Gods come up with the Champion Solution. Four mortals would be given control of one of the elements, and fight the war for them. With control of fire and water, April and Kyle were raised from birth by the immortals.

After a major twist was revealed, the line between friend and foe is thin. The four Champions are divided and conflicted. To add on to the new circumstances, everyone is getting impatient for the war to finally end, and two powerful immortals come to Caria, set on destroying the Champions and taking control for themselves. The Champions must figure out how to work together again before their town is destroyed, and finally end the war.

It is hard to pinpoint exactly why I loved this book, but I just know that I do! Everything flowed together nicely, and I could not stop reading it! The writing is amazing, and if it was turned in for a grade in school, the teacher would give it a perfect score.

The pressure on the characters to finally end the war forced them to a breaking point, and I greatly enjoyed the action towards the end! April's bravery and strength tripled in the second book, and readers saw more of her powerful side in this book, rather than being more vulnerable in the first. I love the characters, but I know that somebody has to die. I really hope it's not going to be who I think it will be, given which side wins in Greek mythology.

The ending was satisfying, and I am excited to read the next book, Champions: Under Fractured Brilliance.
Read my review of the first book in this series, Champions: At Fire's End