Boon on the Moon by John Huddles 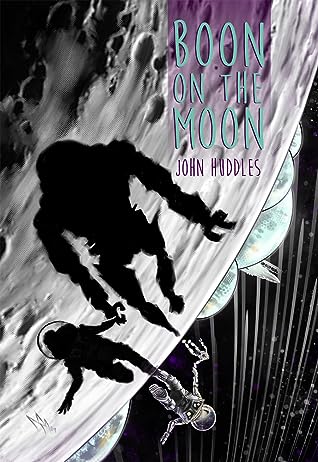 Boon on the Moon is a middle grade science fiction story that is perfect for younger readers who have an interest in space with a big imagination! This book was sent to me by the author. ten-year-old Byron, nicknamed "Boon" is always getting into trouble on Earth. From his wacky inventions to running away to explore caves, he is a handful to say the least. But when his family gets the chance to travel to a colony on the moon, Byron has the chance to redeem himself by using his creativity to save the world from a White Wormhole.

If you enjoyed Frozen Secrets, you'll love this read! The hypothetical scenario of this White Worm (wormhole theory, or formally known as the Einstein-Rosen bridge theory), was super fun to read about! I enjoy that despite how complicated the idea actually is, Huddles shaped this theory into a circumstance that actually seemed straightforward and rather simple to understand. Honestly, the pages explaining the creation of the White Worm should be on Wikipedia or Kids Britannica. This approach is also impressive and unexpected considering Huddles' track record with his recent film, The Philosophers, being a R-rated thriller. But that background was particularly useful for having an immense amount of suspense and excitement.

Boon on the Moon is a fun, creative read that can encourage curiosity and enthusiasm for science. Some of the plot was extremely unexpected and I enjoyed some of the similarities to The Martian. I enjoyed the conclusion of the book and how it summed up future generations nicely. Even if one is not a 10-year-old boy, I still liked the story with its heavy involvement in science. However, one complaint I have is that the emphasis of Bryon's overactive imagination sometimes made it slightly confusing for me to distinguish between reality and daydream.

Email ThisBlogThis!Share to TwitterShare to FacebookShare to Pinterest
Labels: 4 Stars, Middle Grade, Science Fiction
Posted by pagesforthoughts at 10:51 AM