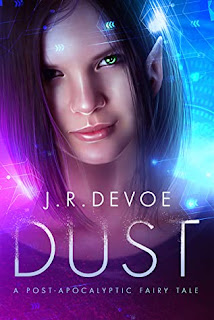 Dust is the first post-apocalyptic fairy tale book I received from the author. Dust is released today! In the future when Earth is mostly dead and humans mostly extinct, intergalactic pixies arrive through a magic gateway to prepare the planet for new settlers. Alien Nya, with the power to harness sonic vibrational frequencies to turn things to dust, discovers that humans still remain on Earth, and befriends a human boy, Dexa. After reporting their existence, she hopes that her kind will leave. But instead, antagonist Jexa sets to kill them. Nya decides to follow in her mother's footsteps and lead a giant rebellion against Jexa to save what is left of humanity.

Nya is courageous and one of the bravest protagonists I have ever encountered. Her drive to help humanity and do the right thing despite the serious danger of losing her life was incredible to read. I loved the inspiring message of being the spark of light in the dark and being kind to those who are different than you- something we should follow today in these dark times.

I loved Dexa's drive to save his own people, as well as Nya. I enjoyed the hint of romance between the two that I predict will be explored further in the coming installation. I enjoyed how their complex relationship did not hinder or distract from the plot development. The future scenario of a destroyed environment will quite frankly a possibility, and I enjoyed how while the book was very fantasy, there were hints of reality embedded.

Growing up, I have been obsessed with fairies and magic, so Dust was super fun for me to read. The cover is absolutely stunning and I love the magic glow surrounding Nya. Speaking of magic, the imagery surrounding her powers, especially near the end, was terrific and I enjoyed the increase of her ability and confidence in herself by the end. I loved the ending being filled with happiness and anxiousness and sadness all at the same time. I enjoy that there was a firm conclusion to keep readers satisfied, but also a gateway (no pun intended) to a huge problem with exciting promise for another story.