Stuck on Earth by David Klass 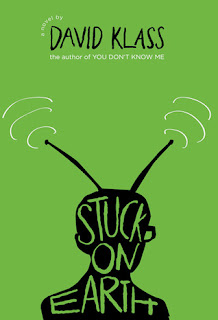 Stuck on Earth is a combination of science and realistic fiction with a satirical twist about an alien who inhibits a human boy. Ketchvar III is a gastropod from the planet Sandoval. His species is alarmed at how humans are destroying their planet and pushing it to the brink of demise. Armed with the Gagnerian Death Ray, Ketchvar must inhibit the body and brain of a teenager, Tom Filber, and determine whether or not the human race should be annihilated for their own safety.

Stuck on Earth is super bizarre, nothing like I've ever read, and a book I can never forget! This book is very ironic and satirical, especially in the age of nuclear weapons and global warming. We often wonder ourselves if humanity is worthy of the Earth, and in the age of global warming we are destroying our precious home rather than saving it. I loved how this book conveyed those messages and spoke of real environmental issues, as well as what we can do as individuals to clean up our mess.

I also love how this book was still realistic, and for a few chapters even I doubted whether he was actually an alien or young bullied teenager with a vivid imagination. It was interesting how the book drew parallels between between being an Alien and feeling like one.

It has an amazing message about loving and caring for the environment, as well as our family, friends, and neighbors. Ketchvar became entangled in his disastrous family, and I really enjoyed how he unified his family and made friendships. His take with romance and kissing was hilarious and adorable. This is one of the few books that I've read recently where I know that I will still remember in years to come!

Also by this author, read my review of Second Impact, as well as Losers Take All!